As part of its educational activities the BSS is participating in an Ancient Astronomy day being run by the Iris Project in Oxford on 20th January.

Chris Williams will be presenting the theory and usage of Greek and Roman dials and David Brown will be leading practical exercises which will result in over 100 pupils from year 7 upwards making their own dials. More information in this Oxford Mail article, although the picture of an armillary sphere and reference to an orrery are both misleading – pupils will be making a hemicyclium dial (the small, cardboard version!): 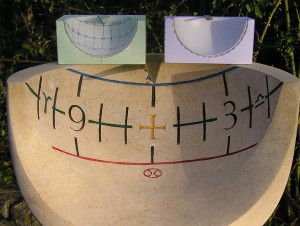 We plan to record the day so photos, videos and even the model plans to follow.

UPDATE: Local interest is growing: the Oxford Times has devoted half its front page to the event but regrettably their write-up is also confused about dials and orreries.

A very happy new year to all our visitors.

Thanks to Fiona Vincent we are pleased to provide a table of Equation of Time adjustments and solar declination for 2015. It is provided in two formats, each of which can be printed on a single side of A4 and folded to make a two-sided A5 version. Depending on your preference, this one can be flipped along the long edge and this one along the short edge.

To print, download the relevant PDF (right click on the link and select “Save Link As…”). Open the file in Adobe Reader and select the following options in the print dialogue: “Actual Size” in the Size tab and 2 pages per sheet, Vertical page order and Landscape orientation in the Multiple tab .

Or you may prefer to wait for the printed version which will be included in the March Bulletin! 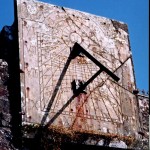 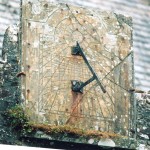 Thanks to John Lester for the following description:

Some would describe this dial on the church porch as Jno Berry’s masterpiece. It is certainly a fine dial though the slate has become badly cracked since it was engraved in 1762. It follows the usual pattern with winged heads in the top corners and the date displayed around the arch. Below this is a traditionally lugubrious motto, “Tempus fugit mors venit” (Time flies, Death comes) and underneath that a sun face surrounds the gnomon root. A further motto appears below which reads “Nos ut umbra” (We are like a shadow). The hours shown are VI to VI with a decorative cipher at noon. The half hour divisions each have a fleur-de-lys decoration and quarters are also shown.  The dial not only has 12 declination lines which show the length of daylight in Arabic numerals and, less precisely, the signs of the zodiac, but also set of vertical lines indicating the direction from which the sun is shining. As if that were not sufficient, Berry has provided lines which tell us the time of noon, relative to our own local time, at eleven places around the world! Of the more obscure ones, Fort St. George and Surat are on the East and West sides of India while Port Royal was the original name of Kingston, Jamaica. Finally, the maker has added his own name at the bottom of the plate in modestly small letters. Even Pevsner mentions this dial though he offers no praise whereas Mrs Gatty devotes generous space to it and gives details of Berry’s life. 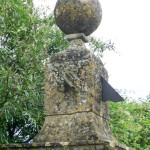 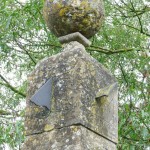 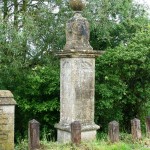 Maud Heath was a pedlar woman who in 1474 left sufficient money to endow the causeway which crosses the Avon just before it reaches Chippenham in Wiltshire.  The best preserved section is a raised footpath supported by 64 brick arches, allowing the river to flow underneath in times of flood.  Half way along the causeway, at Kellaways, stands a pillar erected in 1698, and bearing this cube sundial.  The original Latin mottoes were translated by the Rev W L Bowles and inscribed on the lower section c 1828.  The Rev Bowles had a reputation for absent-mindedness.  At a school prize-giving he presented a Bible to one child, having written in it “With the author’s compliments”.

Two other dials grace the causeway.  Towards the eastern end, at East Tytherton, a very vandal-proof quincentenary memorial dial was built in heavy stone in 1974 (SRN 3089), and at Langley Burrell, at the western end, you will find a well preserved small vertical of 1719 on the church of St Peter’s (SRN 3085).

Slightly later and slightly thinner than usual, the December Bulletin will be delivered to members in the next few days. The problems have arisen because of the poor health of the Editor, John Davis, which prevents him using a computer for extended periods. A scratch team of substitutes, led by Frank King, have completed this issue and have been overwhelmed both by the extent of the work John undertakes and how he makes it appear so effortless. Very best wishes to John: we are looking forward to him being able to pick up the reins again.

8. Sundials on the Tropic of Capricorn – Anthony Capon

12. In the Footsteps of Thomas Ross. Part 9: The Mercat Crosses of Scotland and their Sundials – Dennis Cowan

19. The Future of Dialling – Tony Moss

26. The Sad Story of a Sundial – Piers Nicholson

The Bulletin‘s editorial explains why the December issue is thinner than usual and that the editorial role has evolved beyond a single volunteer. Having been personally involved in the production of the December Bulletin, and taken professional advice, I can see that the role is enormous and that there are many stages and skills. It is capable of being organised in a more collegiate form.

First and foremost are our contributing authors, without whom there would be no Bulletin. We have some articles in the pipeline but more are needed. Please could would-be contributors send their articles to editor@sundialsoc.org.uk END_OF_DOCUMENT_TOKEN_TO_BE_REPLACED