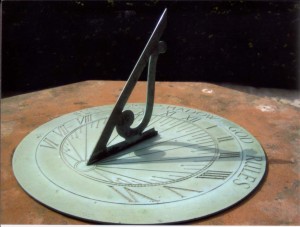 We have 2,624 examples in the Register (as at July 2013).  In its simplest form, this is the common ‘garden centre’ dial, often in brass or bronze.  To tell the time properly, as for any ‘scientific’ dial, the sloping edge of the gnomon must point directly to the Pole Star.  This means that not only is the ‘noon’ mark on the dial directed to the North, but also the slope of the gnomon must equal the latitude for the place where it is installed.  A well designed and made horizontal dial can be a precision instrument, showing sun time to an accuracy of a minute.  It is sometimes engraved with the means to convert to clock time depending on the date, using a table known as the ‘Equation of Time’, and good examples are often engraved with the maker’s name and date. 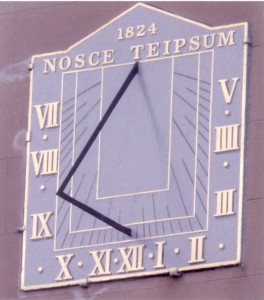 3,075 in the Register.  Normally seen on a church, above the South porch or on the tower.  They were often used as a means to correct the church clock (the dial would set the time, the clock would then keep the time, through the night and dull days).  They are made in a variety of materials, and sometimes show the names of the churchwardens under whose auspices they were erected, and sometimes also the season, by means of ‘lines of declination’.  The shadow of a marker on the gnomon, known as a nodus, lies on one of a series of painted or engraved curves, typically one for the summer solstice, one for the winter, and one for the equinoxes.

Most verticals face directly to the South, and you may occasionally see one that is canted slightly to one side, to correct for a non-South-facing wall.  However they can be designed for a wall facing in any direction, even one facing North! 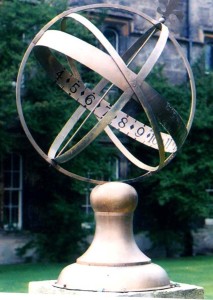 427 in the Register.  Also known as Equinoctial dials or Armillary spheres.  The only vital components are the gnomon (pointing as always to the Pole Star) and the equatorial ring on which the hours are marked.  However several other rings may be introduced, and they can be the most attractive of all dials.  This dial has the simplest of mathematics, with the hours marked at regular 15 degree intervals around the equatorial ring. 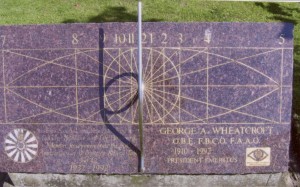 These are not seen so often, and we have just 44 recorded.  The dial plate, unlike with a horizontal or vertical dial, lies parallel to the gnomon, and the hour lines are parallel across its width. In a popular variant, the dial is made in the form of a cross. 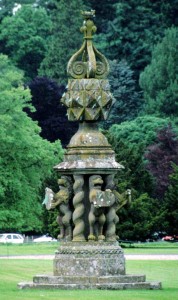 561 examples, many in Scotland.   Sometimes many dials are incorporated in a single mount, often a stone block carved to a cube or to a complex geometrical form.  Sometimes found on the Market Cross in the centre of a town, and many extremely complex examples can be found north of the Border, where they were popular in the 17th to the 19th centuries. 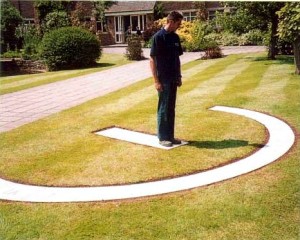 116 examples, mostly modern.   This form of dial breaks away from the need for a sloping gnomon.  Instead the gnomon is vertical, and is commonly provided by the body of the viewer.  To allow for the varying height of the sun in summer and winter, the viewer stands on one of a set of ‘month’ positions, and his or her shadow indicates the time on a large ellipse marked out on the ground.  It is naturally not a precise time-teller, but its interactive nature makes it increasingly popular. 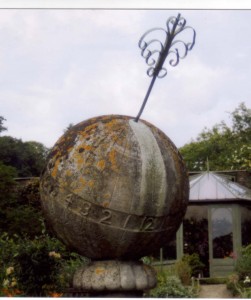 136 in the Register.   These include ‘scaphe’ dials, where the hours are marked in a scooped-out hollow, spherical dials where the ‘shadow-line’ tells the time or where a movable gnomon is used, and many other varieties.

Summary of Dials by Type