aberration (of light): the effect by which the apparent direction of distant astronomical bodies is altered by
the velocity of the Earth and the finite speed of light. Discovered by James Bradley, it has a value of
20.47 arc-sec and is thus totally insignificant to dialling.

accuracy (of a dial): a measure of how closely the time indicators (lines or points) of a dial indicate the true time. Contrast with resolution. See also precision.

Act of 1751: {1752} refers to an act of the British parliament in that year which finally adopted the
Gregorian calendar and set the beginning of the (English) year to 1 January, rather than 25 March. As a
result, there can be some confusion about the year, prior to 1752, for dates between January and March.
Scotland’s New Year’s Day had already been set to 1 January since 1600. Dates in the Julian calendar are
usually denoted “Old Style”, with those in the Gregorian “New Style.

British dials made before 1752 and which have EoT or sunrise/sunset tables show dates 11 days
earlier than the current ones, e.g. the vernal equinox is on 10 March instead of 21 March, and the EoT
will be shown as zero on 5 April, 3 June, 23 August and 15 December. Note that the Act was passed in
1751 but did not come into operation until the following year, hence the alternative dates sometimes seen.

age of the moon

See phase of the moon.

An annual calendar of months and days, with astronomical and other data. They usually include an ephemeris of the Sun and some other celestial bodies, the equation of time, the Sun’s declination etc. Almanacs are sometimes inscribed on, or accompany, C16-18 dials.
The annual Nautical Almanac, produced by the Royal Greenwich Observatory, derives from the version first published by Astronomer Royal Nevil Maskelyne in 1767.

The revolving arm of an astrolabe through which sightings of the stars are made. Sometimes used on sundials where a pinhole at one end of the ~ forms an image of the Sun on a plate at the other end carrying an analemma.

A mounting system for an astronomical instrument that allows it to be set in altitude and azimuth. The term is also used to describe the horizon co-ordinate system which uses these two parameters.

a clock with a dial face like an astrolabe, showing seasonal hours.

In modern usage it is a graphical plot with the Equation of Time on one axis and the sun’s declination on the other. In appearance, a tall thin figure of eight. The dates of various points around the curve are often shown. The shadow of a point falling onto an arbitrary plane at the same clock time each day will trace out an analemma over the course of a year. Normally seen on the noon line of a dial, but can be on any hour line. The exact appearance of the analemma will depend on the plane upon which it is projected. 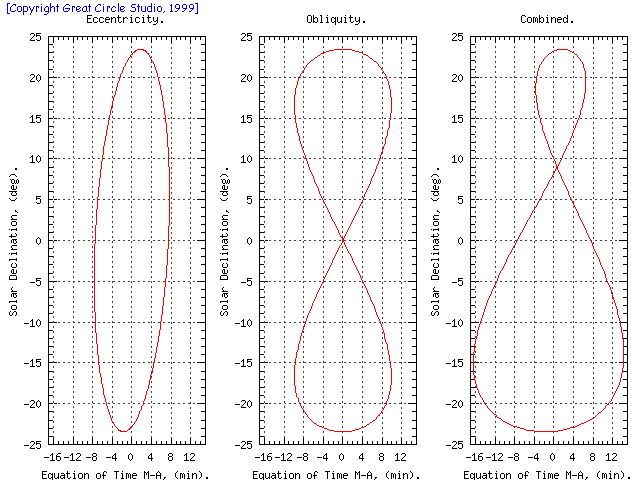 The components of the analemma

The word analemma has had several other meanings in the history of astronomy and dialling. In the first century BC, the Roman engineer Vitruvius used the word to refer to a graphical construction, equivalent to today’s orthographic projection. In the second century AD Ptolemy used analemma to mean an instrument acting as a nomograph for defining the angles of a dial. The use of a modern analemma on a dial dates to around 1640, and the first treatment in English was by Samuel Foster in 1654.

P>angle: (units of measurement) may be decimal degrees; degrees, arc-minutes and arc-seconds; radians (2

radians = 360º); or (seldom, military equipment) mils (6400 mils = 360º); or (very rare) grade (1/100th of a right angle). Preferred notations are: [dd.ddº or ddº mm’ ss”]. Note that trigonometric functions in computer spreadsheets (e.g. ExcelTM ) are always defined in radians. The mathematical convention is that positive angles are measured counter-clockwise, usually with the zero angle position in the 3 o’clock direction or along the x-axis (see cartesian co-ordinates). In dialling, it is more common to measure angles counter-clockwise from the noon line, although some authors measure from the sub-style line.

The parallel of latitude at 66° 34′ S. Note that this defines the northern limit of the region around the S pole having at least one day a year with no night.

The point on the celestial sphere directly opposite the sun’s position.

A small transparent hole in an opaque surface, designed to let a small beam of sunlight through to fall on a dial plate or alidade e.g. for noon dials, ring dials and heliochronometers.

The point where the Earth’s orbit takes it furthest from the sun. It occurs during the first week of July.

Orbit when it is furthest from the Earth.

A curve which is part of the circumference of a circle.

An angular measure equal to 1/60th of a degree. Preferred notation [‘
or arcmin].

An angular measure equal to 1/60th of an arc-minute. Preferred notation [ ”
or arcsec].

Parallel of latitude at 66° 34′ N. Note that this defines the southern limit of the region around the N pole having at least one day a year with no night.

A skeleton model of the celestial sphere with rings representing the equator, tropics etc. Often finely made in brass, but versions in wood with paper scales were common in 19th century France. It is also the basis of a form of dial – see armillary, dial (types of).

Rising towards the zenith. Note: astrologers have a different definition.

A mathematical curve which is formed by the envelope of a series of straight lines, and has the equation: x2/3 + y2/3 = 1. In dialling, it is the shape of a vertical gnomon used in the latitude-independent astroid dial. The astroid curve is also one branch of the shape which is traced out by a point on the circumference of a circle as it rolls inside a circle of four times the radius.

An early astronomical instrument in the form of a heavy disk (the mater) which was suspended vertically and had an angular scale marked around it (the limb). A coplanar klimata and an alidade rotated about its centre. A fretted rete gave the positions of the brightest fixed stars. The various components were held on the central pivot (the pin or axis) by a small wedge or horse; sometimes dog.

The planispheric ~ represents the celestial sphere by a two-dimensional stereographic projection, showing the position of the sun and major stars at different times and dates, as well as different latitudes. A separate plate is required for each latitude. It was probably a Greek invention of the 2nd century BC, but it was developed extensively by the Islamic cultures from the 9th century AD. It fell out of use in the late 17th century in the west.

The universal ~ uses modified projections of the celestial sphere so that they are latitude-independent. The Gemma Frisius type (developed in the west in the early 16th century) retains the stereographic projection but moves the centre to the First point of Aries. The Rojas type (by J. de Rojas of Sarmiento, 1550) uses an orthographic projection with a projection point at infinity. The La Hire type (late 17th century) moved the projection point in an attempt to make it easier to read.

The mariner’s ~ is a much-simplified instrument designed to measure the sun’s altitude, using an open frame and weighted at the bottom to make it more stable onboard ship; it is a precursor to the sextant.

The spherical triangle on the celestial sphere whose vertices are the observer’s zenith, the elevated celestial pole, and the position of the Sun (or other celestial body).

axis (of the Earth’s rotation)

Or polar axis: the line running through the true North and South poles about which the Earth rotates.

(of the sun): [A, AZ] the angle of the sun, measured in the horizontal plane and from true south. Angles to the west are positive, those to the east, negative. Thus due west is 90°, north is ±180°, east –90°. It is part of the horizon co-ordinate system. See Equations. Note that navigators (and some astronomers, but not Meeus) measure azimuth or bearings clockwise from the north.