On the 20th. January over 120 pupils at Cheney School in Oxford learnt about the principles of solar time-keeping and ancient Greek and Roman dials, saw a demonstration of how they work and built their own hemicyclium dial – all within the space of an hour. The event, organised by the IRIS project as part of an ancient astronomy day, saw Chris Williams deliver a wide-ranging lecture on how the ancients told the time and the differences in their requirements for timekeeping and those we have today. An extract of the presentation, including various pictures of classical dials, can be seen here.

David Brown then took over, first demonstrating how shadows vary depending on the time of year and why a hemicyclium is more practical than a hemispherical bowl, 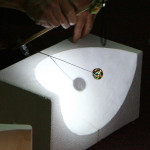 before each pupil was presented with a kit to make their own. Whilst classical unequal hours had been explained and classical time was told during the day, the model dials had equal hour delineation so that they could be more easily used at home. With great enthusiasm and only slight assistance from the BSS team (Chris, David, Jenny Brown and Bill Visick) 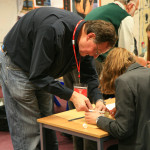 everyone was able to complete the construction. The first steps were getting to grips with the instructions, then cutting out the shapes, 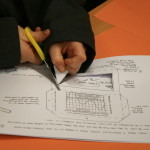 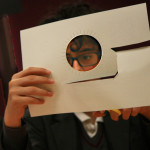 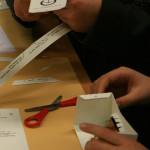 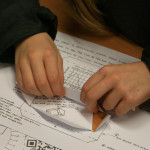 glueing, and adding the pre-inscribed curved surface and gnomon. 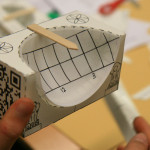 A generation of pupils can be forgiven for thinking that gnomon is the Greek for lollipop stick. After four workshop covering years 7-9, the team was able to take a break 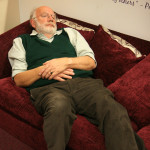 before a further onrush of local families and children from other schools. With a much younger audience, Chris and David cunningly slowed their introductions – helped by probing questions from an 8 year-old who was particularly keen to know why digital clocks showed 00:00 not 24:00 – while Jenny and Bill frantically cut out the models to make construction easier. With only slightly more help than the older pupils needed, everyone was again able to complete construction of their dials. By the end of the day about 120 hemicycliums had been made during the five sessions. The design and manufacture of the kits was handled by David who has been running a production line since Christmas. He airily described the simplicity of constructing jigs and line-drawing machines to convert plastic balls into the dial surfaces but the quality of the results speaks for itself. 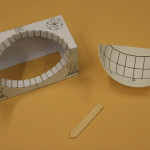 David also brought his own stone hemicyclum dial and a model of the Tower of the Winds. 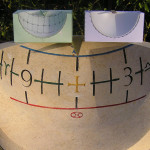 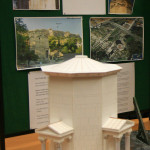 Some pupils finished early enough to go on to the next stage of the challenge, identifying which dial belonged on which wall of the Tower: 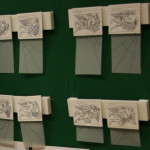 After a long day, Dr Lorna Robinson, Director of The Iris Project & East Oxford Community Classics Centre, said “[the workshops] were a great hit and every single one seemed to go really well”. David Gimson, Head of History at Cheney School, added “This was a wonderful example of how classics could unite history with science and technology in a very thought-provoking and interesting way. For me as an historian it was great to see my students actually doing something with their hands…There was something for absolutely everybody in this activity”.

The pattern with full instructions is available here but only a limited number of the inscribed curved surfaces and gnomons remain. These will be on offer at the forthcoming BSS Conference for a small charge.

More pictures of the event: 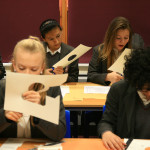 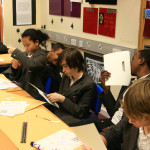 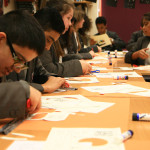 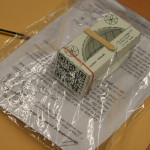 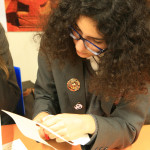 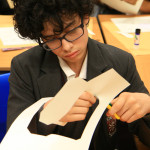 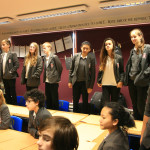