The British Sundial Society has a flourishing Mass Dial Section which is organised by Tony Wood, see Contacts

Mass dials (scratch dials) are medieval (1100 – 1600) dials found on the south walls of churches. They were usually near the main door or the priest door at about four to five feet above the ground. Due to rebuilding, mass dials can end up almost anywhere on a church, even the north wall. They are frequently found inside a later added porch over the south door.

A Mass Dial Register is currently being prepared which will be available in TWO versions. (1) Full details and picture, probably CD only (2) ‘One line’ quick reference guide, by county Please follow the links below to find out more about these fascinating dials.

Here we provide two versions of the form that should be used to submit details of a discovered mass dial for inclusion in the Register.  These are:

The Mass Dial recording form should be printed off and filled in manually.  Notes regarding the entry process are included within the PDF as pages 2 and 3 and these need not be printed unless needed.

On-screen entry of the form may also be made by using the supplied Word version. The necessary information may be typed in and the drawings of the lines of the dial may be made by simply clicking and dragging inside the circles.  Notes on form completion are also provided.  It can be more convenient to make a template of the Form by downloading the Word document here and saving it as a template on one’s own PC.  Thereafter the blank document can simply be called under the usual Word process for accessing templates. Once the form has been completed it can be saved for your own records and of course printed off for sending in to Tony Wood.

In each case the completed form together with any prints should be posted (not sent sent by e-mail please) to Tony Wood at the address given in any Bulletin.

Click on any of the images to see a full size picture. 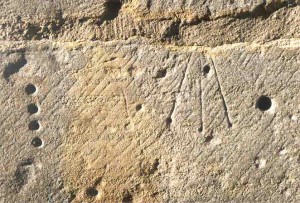 About 8 or 9 inches across and rather roughly cut, mass dials come in a wide variety of designs, from semi-circles of dots to complete circles with associated radii. Their chronology is difficult to determine but simple versions with only four or five lines are early whilst those with numbers round the edge (rare) are late. 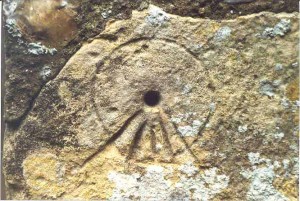 The gnomon, invariably missing, pointed straight out horizontally and so the dial would not record the same hours at all times of the year. The mass dial is in any case usually regarded as an event marker for the church services rather than a time piece. It should be noted that Saxon Dials form a distinct and separate group of earlier date. They are usually skilfully carved in relief, pre-date mass dials and possibly influence some mass dials but it is difficult to establish a link by either style or geography.It is thought that the earliest mass dials may be a simple carving of four or five lines from the gnomon hole, possibly with circle or arc later. Ashton-under-Hill, Worcs. (Fig. 1) and Wootton, Kent (Fig. 2) are typical examples. The Ashton-under-Hill stone also includes an example of ‘four holes in a row’; the row of dots would originally have been horizontal with the gnomon stuck into a mortar line above
.

Re-positioning mass dials is quite common, an inverted example is shown in Fig.3 at Little Missenden, Bucks. 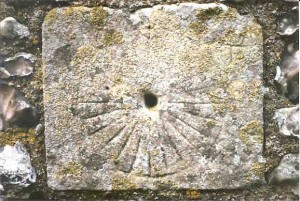 The usual form of later dials has radii principally in the lower half and may be bounded by a circle or an arc of ‘pocks’. Waltham, Kent (Fig. 4) is typical. Lines above the horizontal are a bit of a mystery in practical terms but were probably ‘space filling’ or alignment lines used if the church was limewashed over. The Alfriston in-lining is modern.The quality of carving is very variable and some very crudely cut dials are found. Fig. 5 – Great Witcombe, Glos. and Fig. 6 – Rhossili, W. Glamorgan are good examples.

The final phase is probably ‘dials with numbers round the edge’. The numbers can be in the form of some dot arrangement – Avening, Glos.(Fig. 9), Roman – Bibury, Glos. (Fig.10) or even Arabic as at Sandhurst, Glos. (Fig. 11). This latter dial probably represents the end of the mass dial line as the ‘hour line’ spacing seems to be variable rather than a uniform 15º as on many dials. Also there is no ‘mass marker’ at around 9 a.m. which is a feature of many mass dials.

Frequently, several appear on one church but no regional variation in design has been established.

Their boundaries of occurrence are slowly appearing. Some counties (e.g. Lancashire and the West Riding of Yorkshire) have few dials whereas others (e.g.. Gloucestershire, Lincolnshire and Kent) have many.

They are largely an English device; within England some counties have few dials (‘dial deserts’) whilst others are well documented to have many. Scotland and Wales seem to have few, Rhossili, (Fig. 6) is one of the westernmost.

The last picture (Fig.12) is of a dial at Cambury (Department of Lot) in France (southernmost?) and its resemblance to the Great Witcombe dial (Fig. 5) is striking. Whether the mass dial is indigenous to England or came from France (or even Ireland) is still unknown, it is hoped the new Register will at least give us a distribution and maybe further clues to these dials. 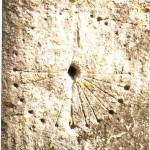 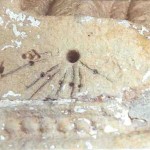 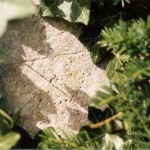 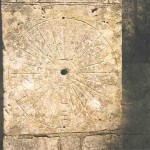 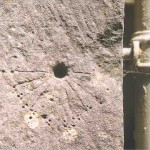 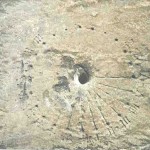 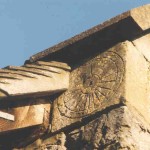 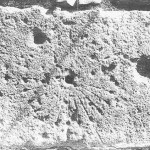