Martin Jenkins has clearly made excellent use of his time in 2020 and has, just ahead of the deadline, submitted details of five dials to the 2020 BSS Sundial Design And Restoration Awards 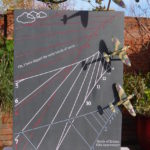 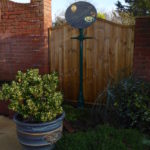 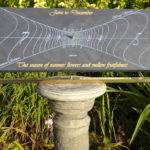 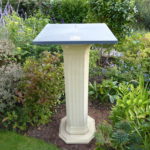 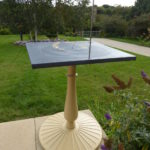 Because of my interest in flying and 2020 being the 80th anniversary of the Battle of Britain, I decided to design and make a west facing dial to commemorate the event. The dial is slate, 600mm by 480mm x 20 mm thickness. The knowing of time is a very important aspect in flight whether for navigation, fuel management, or coordination between air traffic.

I decided that the dial should indicate, from top to bottom, Italian hours (in the mode of hours remaining to sunset and thus flight time remaining for visual flight), Babylonian hours (hours passed since sunrise and first take-off if flying visual), and solar time (the actual time if flying on GMT). The time lines of Italian, Babylonian, and Solar, are painted in red, white, and blue, indicative of the RAF. The ‘times’ are indicated by the shadow cast by the starboard tip of each aeroplane’s tail plane.

The uppermost aeroplane is a Mk1 Spitfire, the middle one is a Mk5 Spitfire, and the lower aircraft is a Hurricane. Each aeroplane is at a different height perpendicular to the dial plate, to simulate a flight formation just after take-off. The dial is also engraved with the first line of the famous poem High Flight by John Gillespie Magee, a 19 year old Spitfire pilot killed in 1941. 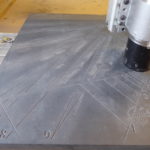 Engraving of the dial on the computer numerically-controlled (CNC) machine tool. 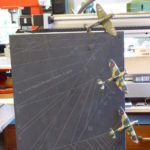 Test mock-up of the aircraft gnomons on the dial.

This dial is a slate ellipse of major axis 600mm, minor axis 470mm, thickness 20mm. It is west facing and indicates the hours remaining for gardening. The furniture consists of a gold leafed sun, gold leafed flowers, and gold leafed bees. The phrase below the flowers states; ‘Heaven is the sun, flowers, and the buzzing of bees’.

The idea behind this dial was to act as a reminder to a very keen gardener just how much time was left before it was time to ‘quit’, otherwise insufficient time was allocated for clearing-up, putting tools away, and generally completing all gardening tasks before sunset.

The dial is mounted high up on a cast iron decorative post in a prominent position in a boundary flower border. There is thus no excuse for not seeing it!

The dial was engraved, and the bees and flowers carved, using my computer numerically controlled (CNC) machine tool. 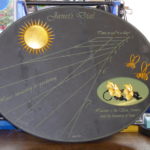 The completed dial on the workbench. 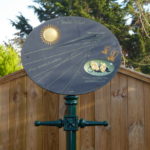 Close-up view of the dial in the garden.

The dial plate is slate 500mm x 240mm x 20mm thickness. The supporting frame and rotating mechanism are constructed from brass and stainless steel. From my experience these three materials are the most durable in the British climate!
In order to indicate mean time on a polar dial, it is usual to have either analemmas superimposed on each time line or to incorporate a separate Equation of Time chart. Neither of these appealed to me, as the former leads to a lot of ambiguous clutter on the dial and the latter is difficult to incorporate tidily into a polar dial design. I wanted to pursue a different approach.

In order to remove the ambiguity of reading an analemma at each hour line, I decided to design the dial to use both sides of the slate and thereby separate the analemma curve into two separate periods. This of course necessitated a precise mechanism to ensure that rotation of the dial plate for each calendar period kept the correct latitude setting. The dial’s latitude is set using the protractor unit on the end of the dial frame. By pulling out the detent plunger, the dial can be rotated accurately to its new position for any latitude set.

The December to June side carries the phrase ‘Oh to be in England now that spring is nigh’ and the June to December side ‘The season of summer flowers and mellow fruitfulness’. These phrases are picked out in gold leaf.
The dial was engraved using my computer numerically controlled (CNC) machine tool. 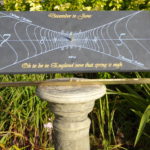 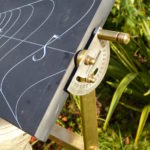 The dial is delineated for our home location. The dial’s delineation is quite complex to read, given the numerous lines and their intersections superimposed upon the basic solar time layout. It was therefore decided to include four smaller versions of the main dial additions at the bottom of the dial plate indicating Italian hours, Babylonian hours, the sun’s azimuth, and the sun’s altitude to assist with identifying those points on the main dial. An Equation of Time chart is also included on the dial.

The dial is also engraved with a piece of text by Socrates. This text is very relevant to designers and engineers and was much loved by an extremely brilliant departed colleague of mine. It is also very relevant to diallists! It is taken from the Dialogues of Plato, Philebus, 5.1.

“My meaning is certainly not obvious, and I will endeavour to be plainer. I do not mean by beauty of form such beauty as that of animals or pictures, which the many would suppose to be my meaning; but, says the argument, understand me to mean straight lines and circles, and the plane or solid figures which are formed out of them by turning-lathes and rulers and measures of angles; for these I affirm to be not only relatively beautiful, like other things, but they are eternally and absolutely beautiful, and they have peculiar pleasures, quite unlike the pleasures of scratching.”

The gold leafed Jenkins coat of arms was added as a piece of whimsy. The motto translates as ‘Proceed with Caution’, very relevant when designing and engraving such a complex dial. Incidentally, the engraving took over 6 hours of continuous machining on my computer numerically controlled (CNC) machine tool. 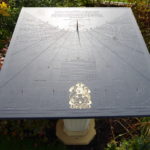 Overall view of the dial plate, showing shadows from the main gnomon and those of the minor gnomons. 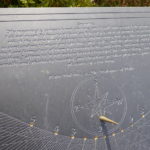 Close-up view of the writings of Socrates. 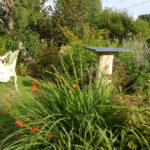 The dial in the flower border.

The dial is fairly unusual as the observer must first determine the date, then using the appropriate date circle look for the intersection of the shadow line with the date/time line to obtain the time. The dial is also unusual in that the mean time lines run from June to June, centre to outside i.e. the equation of time corrected time lines are continuous for the whole year. The zodiac symbols are gold leafed to highlight the season/date rings to assist with using the dial. The dial plate also incorporates two smaller dials. One indicates the time on our birthdays, and the other shows the time on our wedding anniversary. The gnomons are made from stainless steel rod 1.5mm in diameter. These slim gnomons cast nicely fine shadows and combined with the time lines spaced at 5 minute intervals, enable the time to be reasonably determined to within a few minutes. 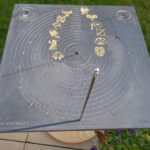