Promoting the Art and Science of Gnomonics since 1989

Dials of the month

Projects to make your own dials 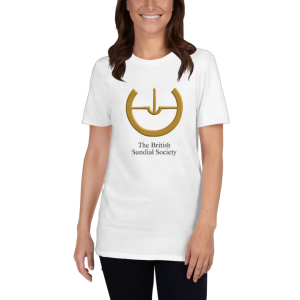 Anyone interested promoting the BSS can now purchase T-shirts with the BSS logo. They are made on demand by BSS member Martins Gills through his “Cat in Space” online shop. Various logo versions, shirt colours and sizes are available. Use this link for direct access to the collection: https://cat-in-space.com/collections/bss. Martins has kindly provided the discount code “BSSoffer” which can be used during the checkout process and provides a reduced price of £13.70 including all taxes and shipping. 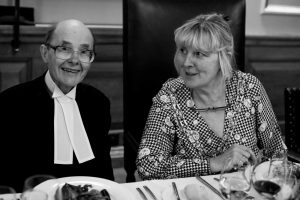 Frank King has sent in this photograph of two BSS members taken at the Installation Dinner of the Worshipful Company of Clockmakers on 28 January. Earlier in the evening, Joanna Migdal had been installed as the new Master of the Company and she is seen here sitting in the Magisterial Chair. The material from which her dress is made is decorated with clocks and watches. At the end of the Dinner, Joanna made her inaugural speech as the new Master. Frank was invited to reply. He is wearing the number two dress of ‘The University Bellringer and Keeper of the University Clock’. This unusual Cambridge post dates back to the 15th century. Oxford doesn’t have an equivalent and one wonders how they ever ran to a timetable. Frank mentioned a number of notable sundial makers who have been Masters of the Clockmakers’ Company ranging from Elias Allen (1636) to Joanna Migdal (2020). You can hear Frank’s speech below. 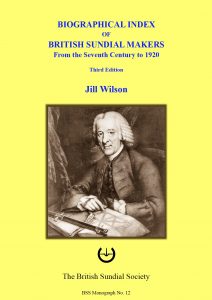 A new edition of Jill Wilson’s Biographical Index of British Sundial Makers (BSS Monograph No.12) has just been published. Updated and greatly expanded since the second edition of 2007, it gives details of almost 1900 dial makers working from the 7th to the 20th century, and includes the heyday of British scientific instrument making. Not only is it essential for conducting research into dial making, but it is also a good read, with some fascinating snippets. Arranged by centuries to emphasise changing styles and to show associations between dial makers of their period, it is complemented by an appendix covering sundial makers in London guilds, with a visual representation of master-apprentice relationships mentioned in the text.

The Index is A4 size as before and now has 240 pages. It costs £18.50 plus postage and packing which is £4 for the UK. To order or enquire about postage to other destinations, please contact Elspeth Hill. 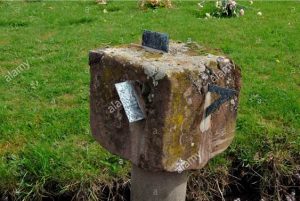 This dial (SRN 1409) was recently stolen from the churchyard in Osgathorpe, Leics. If you see or hear of it on eBay or any auctioneer’s site, please let David Brown know. The theft has been reported to the police. 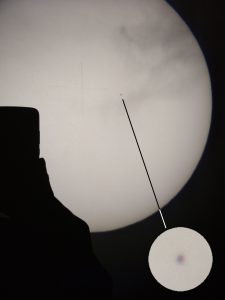 Frank King first tried to observe a Transit of Mercury in November 1960 but his equipment wasn’t up to the job. Somewhat late in the day, he had a second attempt on Monday 11 November 2019. He has sent in this photograph – click to see a larger version.

You can see part of an image of the sun projected onto a screen by a telescope at the University of Cambridge Institute of Asronomy. Mercury can be seen as a tiny, but obvious, dot. The dark wispy features are clouds. By careful study of the black shape on the left, you will see a silhouette of part of Frank’s mobile telephone supported by his well-manicured right thumb.

Frank explains that he was unable to get a decent photograph without standing between the telescope and the screen.

A new issue of the Fixed Dial Register has been published, designed for sale to the general public. 4,500 dials in the British Isles are included, with a full description and one large photograph per dial and up to three additional smaller photos. Coordinates can be copied and pasted directly into mapping apps like Google Maps or Streetmap. The register is in the form of a pdf file, indexed and book-marked by county. Click here to see a couple of sample pages.

The register costs £15 and is available from sales@sundialsoc.org.uk, on DVD or USB Memory Stick. Christmas is coming!