Tagged: Dial of the Month 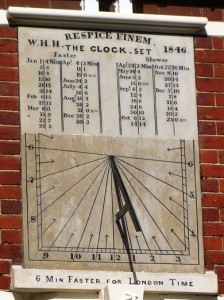 William Hawkins Heath of Andover (1787 – 1861) was a Banker, Maltster and Coal Merchant, and served as Mayor of the town in 1840 and 1858.  In 1833, he designed a vertical dial for his home, Heath House, where the Savoy Cinema now stands.  That dial, which was rescued and can be seen now on the rear wall of the cinema, is in poor repair, but we have a record of it as SRN 4041.  Thirteen years later, Heath designed the dial shown here, which survives in better condition.  Unusually for a vertical, it bears a table of the Equation of Time, labelled ‘The Clock Set’, together with the warning to set your watch an additional 6 minutes faster for London time.  The motto ‘Respice Finem’ translates as ‘Look to the end’, in the sense of ‘Consider the effects of your actions’.
Thanks to Peter Ransom for the information and to Terje Hartberg for the photograph. 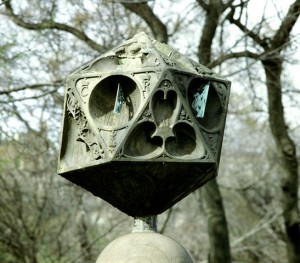 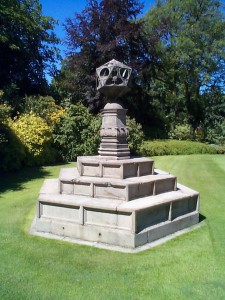 Known as Queen Mary’s Dial, this is the finest example known of the facet head class.  END_OF_DOCUMENT_TOKEN_TO_BE_REPLACED 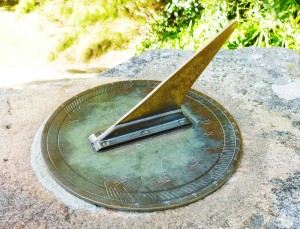 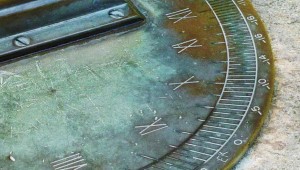 This sundial was constructed by J.R. Miller at the Royal Observatory in Cape Town END_OF_DOCUMENT_TOKEN_TO_BE_REPLACED