Construct this unique instrument and you can read Solar Time simultaneously on four of the most common sundials. As an introduction to sundialling for beginners this project will develop several important concepts. 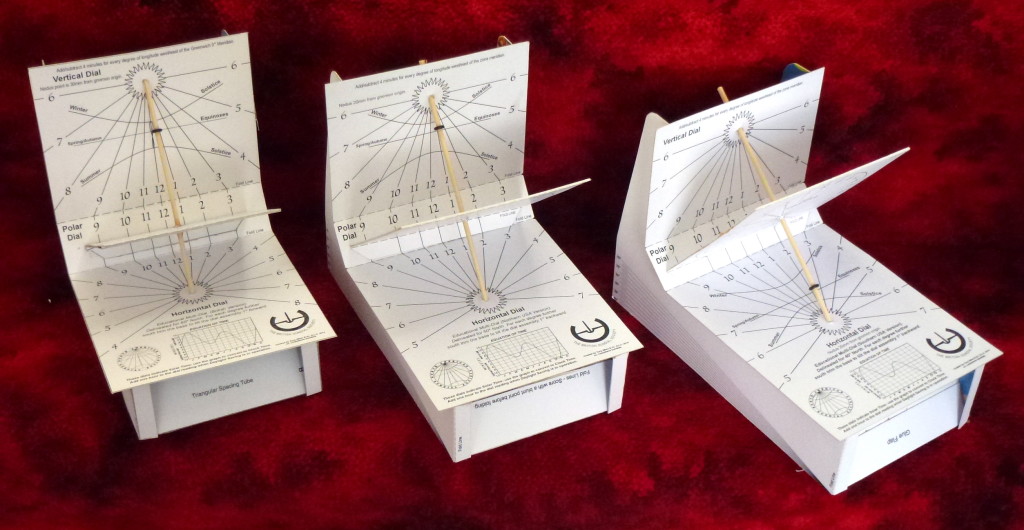 The initial inspiration for my Educational Multi-Dial arose from a diagram in ‘Sundials’ by Frank W. Cousins. My own design progressed through plywood and MDF construction in pursuit of something that could be made in schools but most were beyond the modest equipment found in the classroom.

The most significant problem, pointed out in a Sundial Mailing List exchange with teachers, was that there was no adjustment for latitude with my earlier versions. In pursuit of this I began to consider a latitude-adjustable cardboard dial assembly made from discarded breakfast cereal packets with pre-printed paper faces attached. This promising idea came to a dead end when Kelloggs U.K. were unable to fit it into their programme. Trimming the base to pre-printed degree lines solved the latitude adjustment so a dial delineated for 50° at the English south coast could be cut and sloped for any latitude up to 60°. At each stage the gnomon remains parallel to the earth’s axis and the dials reads true.

When Fred Sawyer of NASS pointed out that the 50° delineation was useless in the USA it was time for a complete re-think to include three dials covering 30° to 60° north. At the same time I altered the approach so that e.g. the UK/Canada version was delineated for 60° rather than 50°. This improvement meant that the vertical dial face sloped backwards rather than forwards on adjustment and looked more natural.

(Click on any image to see a larger version)

To reproduce a Multi-Dial for your latitude you will need the card from several large cereal packets, four print-outs covering the dial faces and the supports, a small selection of tools and suitable glues. In England i used a water-based latex adhesive called Copydex which is not available in the US. A web search suggested the following as an equivalent.

Loctite Handyman’s ALL-PURPOSE Adhesive but I know nothing of its uses.

Construction is simple but calls for careful work with a very sharp knife and steel rule. This is work for adult fingers using a safety rule (see my picture) if possible.! Practice on scrap material before attempting the final version. The assembly diagram and photographs should cover most other aspects.

1 Download and print the four templates for your chosen latitude.  A4 self-adhesive sheets (giant labels) are available from major stationers (Staples) for direct printouts.  These avoid shrinkage and wrinkling caused by water-based adhesives.

Geographical note: although designed initially to generate educational dials for the UK, USA and Canada, these multi-dials will work equally well in Europe, Russia, China, Korea and Japan at ±0.5° of any local latitude between 30° and 60° north.

2 Glue the templates to the cardboard backing, draping the paper to avoid wrinkles: 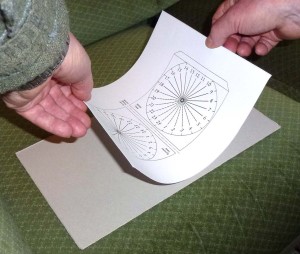 3 Take care while cutting out the pieces, using a safety rule to ensure straight lines: 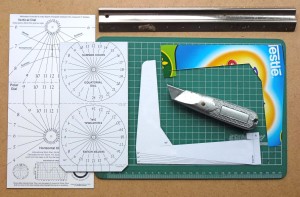 4 When piercing the holes to take the polestyle gnomon (a bamboo kebab skewer) do so perpendicular to the card face. For the initial hole use e.g. a mounted sewing needle for accuracy. A tapered steel pin or engineers’ scriber will enlarge the hole maintaining its true location. The gnomon is inserted after assembly of the dial to distort the holes for its true alignment. For a nodus to track along the seasonal declination lines I used a 2.5mm engineering ‘O’ ring. 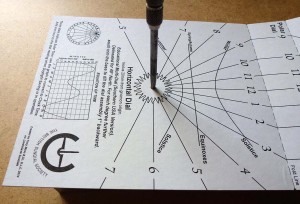 5 Assemble the spacers and use a rubber band to clamp the pieces while drying: 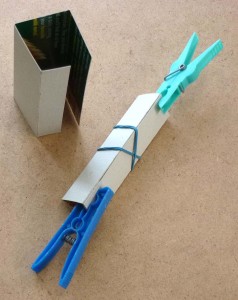 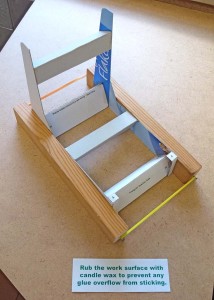 6 Fitting the dial faces to the support (UK & Canada Version) 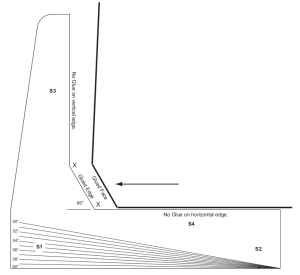 After installation of triangular spacers at S1, 2 and 3, the most difficult part of assembly is ensuring a perfect fit of the corners X, X.

Do not attempt to glue all three dial faces simultaneously.

Apply a ‘contact adhesive’ to the glued joint areas and allow to dry. Slide the three dial faces lightly into place and check the joints at X,X. When you are satisfied with the fit press firmly into place using fingers around the base and thumbs on the narrow dial face. The vertical and horizontal joints can then be eased apart and glued.

Spacer S4 can be added later taking care to avoid the gnomon insertion holes. (See the chain limit lines on the printout.)

7 Further stages in construction are shown in the following pictures: 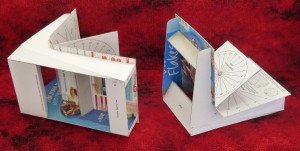 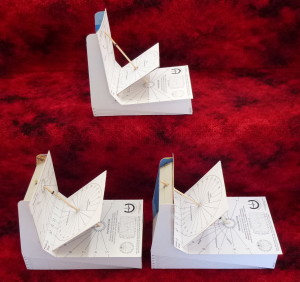 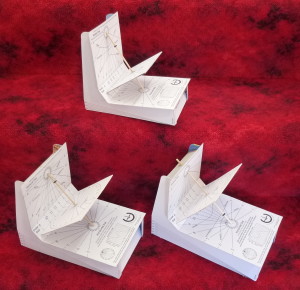