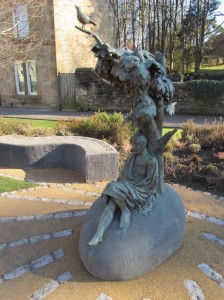 General view of the sculpture

The original commission brief was to produce a sculpture to commemorate an apocryphal local character; a C19th Cattle drover known as Katie Wearie, who was supposed to regularly rest under a tree growing on this site, refreshing herself with water from the West Port Well. This tree was always known as “Katie Wearie’s Tree” until it blew down in the early years of the C20th. Its position was marked by a new tree, but there was strong local support for a sculpture of Katie Wearie to further recognise the spot.

I secured the commission with a proposal based on the idea of a sculpture which also served as a giant sundial and incorporated a seating area. The design was intended to create a place of quiet contemplation and rest reminiscent of Katie’s, and to meditate on the idea of history and the passage of time. It was particularly the appeal of the sundialling aspect of the work which caught the imagination of the commissioning group. The gnomon is formed by a bird sitting on a branch at the highest point of the sculpture and the hour lines are marked out on the ground. The terrain of the site means that the sundial is not accurate to the minute, but the general sense of the passage of time is effectively conveyed.

The final designs were established after a very comprehensive exercise in community consultation and discussion, and the involvement of the local school and local groups was secured to provide some input. This resulted in the composition of a new song, a quotation from which was etched onto the sculpture plinth, and a series of cast tiles representing traditional local trades and crafts, which were set into the ground, forming part of the sundial markings. The finished work was unveiled in July 2011 by the Provost of Linlithgow at a ceremony which included the performance of the new song by the composer and other musicians from the Linlithgow Folk Music Society.

The main sculptural feature, the figure and tree, was modelled in clay in my studio. Moulds were made from this in situ and then taken away by the foundry to be cast into bronze. The plinth and sculptural bench were both modelled in plaster in my studio and cast into concrete in the concrete caster’s workshop.

After the installation of the sculpture and bench the site was landscaped by myself and an assistant, with the sundial markings being laid out in the grass in granite setts.

The photos show the finished work and the construction process. 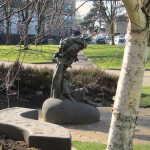 General view of the sculpture and seating area 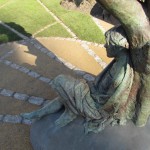 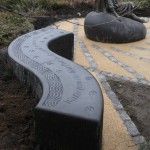 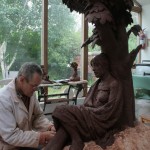 Modelling the Sculpture in clay 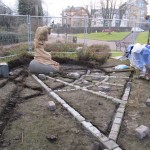 Laying out the sundial markings after the sculpture is successfully installed