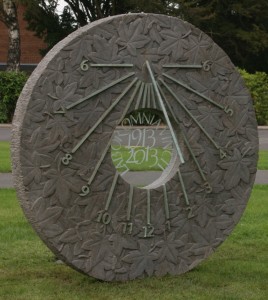 View of the front of the finished Sundial

Designed and made by Tim Chalk

This sundial was commissioned to mark the School’s centenary (which had actually already passed towards the end of the previous year). There was a completely open design brief, with the only requirement being that the sundial should be free standing and be positioned on the lawn in front of the School’s main entrance, and that it should, in some way, relate to a Time Capsule which the School planned to bury to mark the Centenary on Founders Day that summer.

I submitted three alternative designs, from which one option was selected; this took the form of a large circular panel standing in the grass on its edge. A smaller disc lies flat on the grass behind the main panel, suggesting that it has dropped out from its centre, leaving a void of a corresponding size. The small disc carries an inscription with the School motto and the centenary dates. This inscription is replicated in a glass infill of the void in the centre of the main panel, suggesting a ghost image of the disc which has fallen out of the centre. The disc on the ground serves as a marker for the Time Capsule which is buried beneath it. The main panel carries a simple vertical dial with hour marks and numbers, all picked out in bronze against the cast concrete background. The gnomon is a plain bronze rod. The carpet of leaves and seeds represents nurture and growth, central to the role of the school and of education in general in the lives of the pupils. the glazed aperture in the centre evokes the opening up of new vistas through the process of education.

The three initial proposals were presented in the form of small scale maquettes modelled in wax. Once the selection had been made construction began on the final piece. The main panel was modelled in clay, with the hour lines and numerals being added as timber rods and foam board cut-outs. A silicone rubber mould was made of this and used to cast into glass reinforced concrete. During the casting process the gnomon and glass (sandblasted in advance) were incorporated into the cast. A 50mm stainless steel tube was also included in the cast, projecting from the bottom edge, along with two smaller stainless steel rods on either side.

The finished sundial was installed on site by sinking the tube and rods in concrete in a hole dug into the lawn. The main challenge presented by this operation was the need to ensure that the now fairly heavy concrete sundial was aligned correctly on an East/West axis, with the front of the panel facing due south, and that the panel was set accurately on the vertical. On an otherwise fairly overcast day the sun obligingly emerged to provide a reassuring confirmation of the accuracy of the alignment.

The photos show the finished work and the construction process. 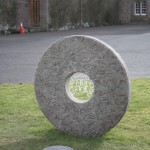 View of the rear of the finished Sundial 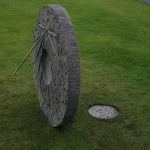 Detail of the sandblasted centre to the main panel, which provides a ghost image of the disc set into the ground being the Sundial, marking the position of the Time Capsule 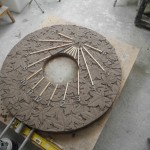 The clay original ready for casting 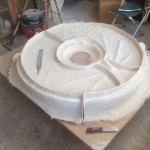 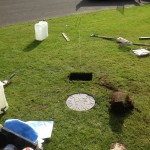 Installation; setting out the site; the hole for the concrete foundations has been dug. The string marks the north/south axis