Submitted to the 2020 BSS Sundial Design And Restoration Awards by Louise Smail, trustee for the Old Parsonage Building and coordinator of the sundial project:

The Didsbury Parsonage (The Old Parsonage) is a Grade II listed building, next to what was the original village green of Didsbury. The building and gardens were left to the citizens of Manchester by Alderman Fletcher Moss in 1919. Through the Didsbury Parsonage Trust it provides a thriving community hub for the people of Didsbury and beyond, in a locally significant and picturesque setting.

The original stained glass sundial in the Library of the Old Parsonage was designed by the then owner, Alderman Fletcher Moss. This sundial went missing at some unknown time before the Second World War. Using archive evidence, including photographs, John Carmichael constructed full-size working drawings including a rendering of the intended replacement sundial on acrylic. He incorporated his own design of a demountable gnomon which is held in place by two magnets. Any accidental knock results in the gnomon falling harmlessly to the ground without damaging the glass. It can be replaced in a matter of seconds. Unlike the original which had white painted glass between the hour lines, the replacement has clear glass that was frosted (sandblasted) on one side. This creates the darkest optimum shadows. Fuller notes are provided separately. 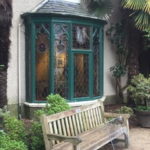 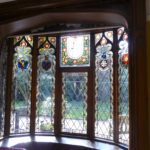 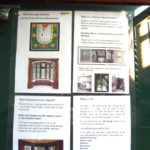 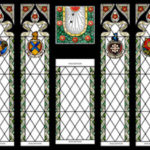 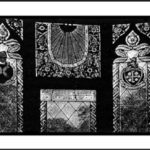 Whilst researching the history of the building, a picture was found in a book that Fletcher Moss wrote which showed the middle room in the Old Parsonage (Fletcher Moss’s library) as having a stained glass sundial (SGS) window. The window is no longer there and despite extensive searches by various people it has not been found. Stained glass sundials are very rare – there are about 44 in the UK- but many are damaged and do not work. A complete list has been complied by John Carmichael.

Research turned up four pictures of the window, but none were in colour. The DPT (Didsbury Parsonage Trust) decided to have the window restored and worked closely with John Carmicheal from NASS (North American Sundial Society) , Frank King and Mike Shaw. The DPT have worked with the members of the British Sundial Society and the North American Sundial society who volunteered their time and expertise and have recreated the design and specifications of the window that Fletcher Moss himself designed. This took much discussion as there was no colour palette. However, the front door to the building was also designed by Fletcher Moss and has design features similar to the window, so those colours were used. Other colours were selected because they were commonly used in similar older stained glass sundials. Although the SGS itself was missing, the Roundels and the inscription along the base of the window were original.

Photos, drawings, and diagrams used to construct the replacement can be seen on Flickr.

SGS’s usually have an image of a fly – but Manchester’s symbol is a worker bee, so a worker bee was incorporated in the design. Next came fund-raising and an application for a grant from the heritage lottery fund. Between fundraising, a legacy, and a National Heritage Lottery Funding award, the money for restoration was found. Pendle Stained Glass, a specialist stained glass company, was awarded the contract. They used original stained glass techniques to recreate the window.

Finally, towards the end of 2019 the windows were installed. Pictures taken from the shadow cast confirmed that the time, suitably adjusted for the Equation of Time, was accurate for an SGS.

Sadly, from March until June the Old Parsonage had to shut due to the COVID-19 pandemic, but opened again for classes, and had an open weekend in August where people could come and see the sundial working. We are probably closed now until Spring 2021 as an exhibition space and so there is limited time for people to see the sundial. We do however intend to install a camera so people can see the window and the shadow cast from anywhere in the world.

The window itself is stunning and well worth a visit – especially on a sunny day.

The DPT trustees who knew nothing of SGSs or much about sundials are now very enthusiastic converts and spend their spare time looking for sundials as well as explaining how dials work to anyone who visits.