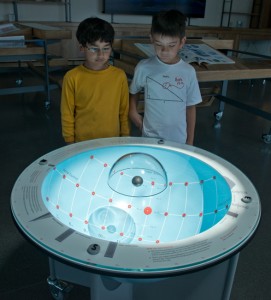 Two young visitors view the Oculus Table sundial, with its instructions, information, and drawings of landmarks, used for north alignment, around the edge. The time is 10:30 on a day close to the summer solstice.

The classic Greek bowl or scaphe sundial was a common sight around the Mediterranean in ancient times. Usually made of marble, it indicated both the time of day and the seasons. Our sundial follows in this tradition, but with one major difference: rather than being fixed in place, it can roll on wheels around a large room to be placed wherever the sunlight falls through the windows.

Commission. Design a sundial that can be used in a large room having many windows as well as a large (glass-covered) hole in its ceiling (an oculus). Also, since this room is a part of the world-famous science and engineering Exploratorium Museum, the sundial should allow some interaction with the museum visitor.

Concept. Adapt the classic Greek scaphe sundial so that it can be moved about to follow the changeable spot of sunlight that shines through the ceiling oculus as the sun moves across the sky. Because the sundial must be aligned to North, allow the museum visitor also to make this alignment.

How to use the sundial. Move the Oculus Table (which is on castor wheels) to position it in the current spot of sunlight. Using the drawings around the edge, rotate the table until it is aligned with the landmarks of San Francisco visible through the many windows in the room: the TransAmerica Building, the Coit Tower, towers of the San Francisco Bay Bridge, etc. When this is done, the table is correctly aligned. Now read the shadow of the small, dark ball (the nodus) located in the centre of the hemisphere, which is also centred on the plate glass top. The time of day can be typically read to five minutes accuracy and the date of the year to one or two weeks accuracy.
Using the small glass hemisphere centered on the plate glass, the visitor can also make a record of the sun’s track across the sky on a given day, or even multiple tracks over many weeks. To do this place the tip of a marker on the small-hemisphere surface such that the tip’s shadow falls on the central ball. When this happens, mark the spot and label it with the time. Then return one or two hours later and repeat. A sequence of such marks shows exactly how the sun has moved across the celestial sphere. 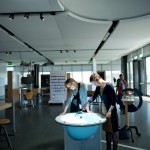 Visitors view the Oculus Table sundial. Note the reflection on the ceiling of the sunlight off the plate glass surface. 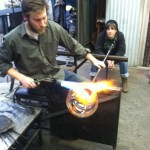 The small hemisphere is blown and shaped.