This sundial was inspired by the fashion for Egyptian motifs, colours and symbolism in Art Deco of the 1920s. 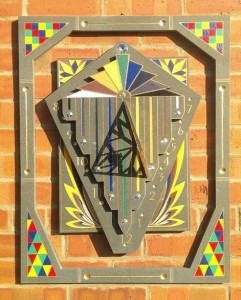 Completed in 2013 and designed by Dr Peter Bristow, it is one of four made for his garden in Oxfordshire by Harriet James. 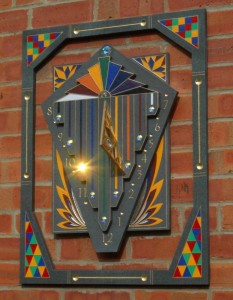 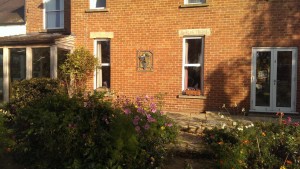 The idea was to fill a space on the wall of the house between windows with something sculptural, bold and ‘glitzy’ which would also function as a sundial. The wall declines 22.2° West of South. It is the hour or half-hour (local apparent time) when the edge of the shadow of the gnomon on the upper slate layer aligns with the centre of a numeral or gold spot on the layer below. 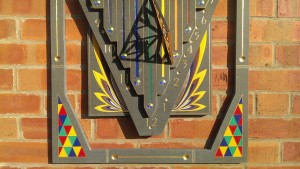 Two of Dr Bristow’s other sundials have inset crystal prisms which cast spectra and reflected light into areas of shadow. This idea was continued here with an octagonal prism set into the gnomon and other crystals with a reflective backing set into the slate. 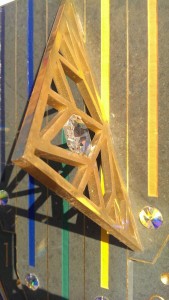 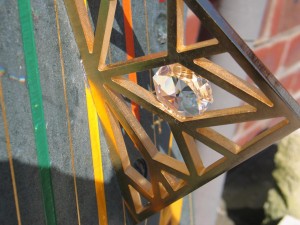 The dial is made of three layers of carved, painted and gilded slate. The outer dimensions of the rectangular frame are 600mm wide x 760 mm high. The brass gnomon was waterjet cut with a pierced lattice pattern and is electroplated in gold. The crystal in the gnomon was fixed by rotating it into slots inside the lattice. 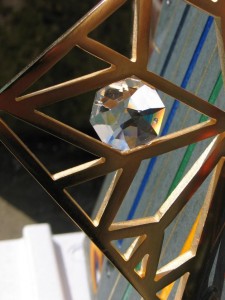 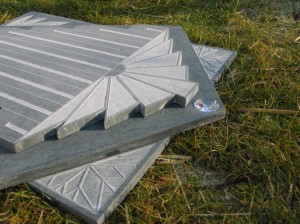 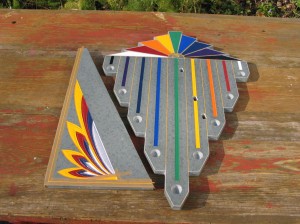 The acanthus leaf design in the bottom corners of the central panel was popular on Art Deco buildings such as the Carreras Cigarette Factory in Camden Town which was built shortly after the discovery of Tutankhamun’s tomb. 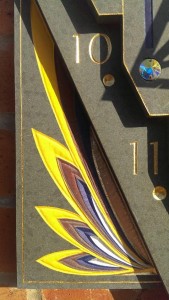 The hour numerals are carved in an Art Deco font, Peignot, which was designed in 1937.

The Egyptian god Horus was a sky god and his right eye was associated with the sun. His eye symbol seems to have been associated with wholesomeness and good health/protection so this was carved just above the origin of the gnomon. 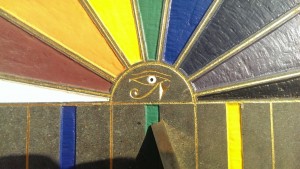 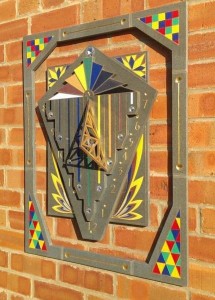