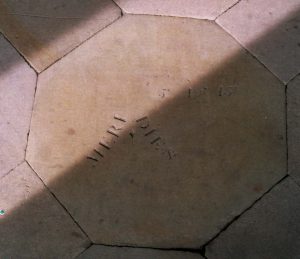 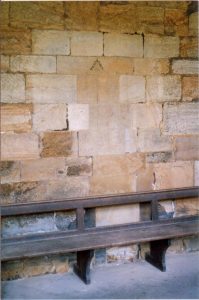 The noon line in the cloister north wall is inconspicuous. It was placed there in 1829 by John Carr, head of Durham School and William Lloyd Wharton, the High Sheriff of Durham County, to better regulate the cathedral clocks. The dated mark shows the meridian and also lesser lines for 5,10 and 15 minutes after noon. It extends from the winter solstice point on the wall to the summer solstice point on the floor. The sunspot aperture is positioned in the cloister mullion stonework. On the south or far side of the cloister the stonework of the crenellation has been lowered at one point to allow the sun’s ray to pass unobstructed at the winter solstice. Parts of the noon line on the floor have been lost to new stonework.