Dial of the Month

Please send your own submissions of your favourite sundials to the Registrar. This is your chance to show your favourite (public) dial (perhaps one near where you live, or one you have found on your travels) to other dialling enthusiasts around the world. 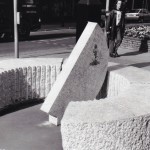 Near the cenotaph in the centre of the town stands the sturdy stone arc of a sundial with a correspondingly stout gnomon, interestingly but correctly placed. The gnomon carries a small insignia of the Royal Corps of Signals. It is a little short of the real length needed at the summer solstice, but makes for a pleasing unity in the design. Hour markers and lines only are shown.

A plaque on the side reads: ‘Presented by the Army Apprentices College to the Borough of Harrogate to commemorate the close association between college and town 1947 – 1996’, and the name ‘Archer’ is the only inscription to be found. The dial was presented when the college closed in 1996.

The chapter ring is made in the form of an arc of a circle of about 240 degrees, being 600mm high and with an overall diameter of 3300mm. It was made in three massive sections, placed an inch apart, and David Young was told that it was placed in position using ice cubes to align it! 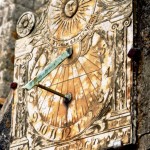 Proudly sitting above the porch of St Columba’s Church is what has a good claim to be the most handsome sundial in Cornwall. It is profusely decorated, even to the extent of limiting its timekeeping abilities since no room has been left for 6am or 6pm. It was generous of Robert Oliver of St Minver who made the dial in 1826 to engrave the names of the churchwardens in larger letters than his own. The colouring of the slate is interesting and unusual and it is worth taking time to appreciate all the decoration from the sun face at the top to all the fine details of the rest of the design. The horizontal line across the dial, marked AE is the declination line for the equinoxes but the present gnomon has no nodus to make it of any use. 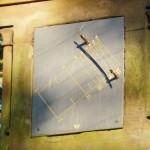 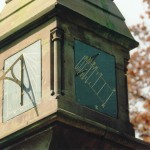 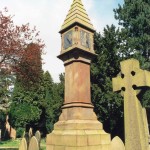 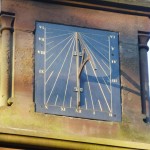 A tall sandstone pillar in the Unitarian chapel graveyard supports a three faced dial, erected in 1871. The faces are slate, with bronze gnomons, their simple delineations picked out in gold. On the north face, where the sun rarely shines, is an inscription ‘In remembrance of the Founders of Dean Row Chapel circa 1688’. A good restoration in 1999, celebrating the millennium, over a hundred years after the dial was erected, may help this excellent dial to at least another century’s use.

Too high above the south porch of the church of St Meriadocus for some of its features, particularly the Equation of Time table, to be distinguished is this handsome vertical south dial. It is intact apart from the lower left corner and its outer scale divides the hours VI to VI into five minute intervals. It has two cheerful mottoes: “Remember Death” and “Hora Pars Vitae” (An hour is part of life). The break-arched dial plate measures 740mm x 580mm. The EoT scale has letters S and F indicating whether the dial is slow or fast while four circles with a dot in the centre might be meant to indicate the four days in the year when dial and clock agree, but only the April one is anywhere near correct. Could there be some other explanation? The maker has signed himself ‘Philomath’, but without leaving sufficient room for the inscriber, who has had to add the last two letters in superscript. The date below is 1793 and in her drawing of 1957, Mrs Crowley has included the letters MES and ER near the broken corner. They can be seen in this photograph of 1966, but are no longer visible on the dial. 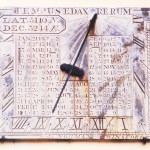 The Sundial House Tearooms stand on the north corner of the crossroads (A396/B3224), and this excellent and unusual slate dial is between first floor windows. Declining east, it shows the hours from 5am to 4pm in 30, 15 and 5 minute intervals. Note the half hours marked with a fleur de lys, and the split substyleat about 9:22 am. The motto – Time is the devourer of (all) things – comes from Ovid’s Metamorphoses, 15, 234. The centre of the dial is almost filled by a table ofeight columns, giving 82 dates for values of the Equation of Time at 1 minute intervals. The maker’s name can be seen along the bottom – J Norman, from Winsford, about three miles away. 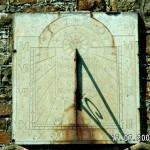 This is said to be the earliest green slate dial in Devon. It is a break-arch dial with the date 1710 running round the top of the arch. It has been suggested that it might have been made by John Berry but the early date and lack of signature makes this very unlikely. There is a sun-face surrounding the root of the gnomon and in a shield below that are the names of the churchwardens Joseph Palmer and William Karslake who style themselves ‘Gents’. It has the hours VI – VI subdivided into halves, quarters and periods of 7 1/2 minutes. The half hour markers each have a fleur-de-lys decoration and noon is indicated by a decorative cipher. The upper corners appear blank: if there ever were any cherubs there, they have flown.

Thanks to John Lester for this description.